Wire Branch of the Clarsach Society

The Wire Branch is one of thirteen branches of the Clarsach Society/Comunn na Clàrsaich https://www.clarsachsociety.co.uk 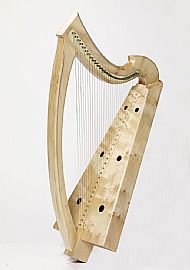 arsach, acknowledging its historical past and developing different styles of playing which encompass both ancient and modern approaches to technique, repertoire, and the instrument itself. We also have several members who play bray harp, as the techniques are similar, as well as those who play gut-strung harps but are interested in the techniques, especially for ornamentation and playing in a clean style.

Since the Wire Branch was founded in 2000, we have

Much of the material that the branch has published in the past, including articles that first appeared in the journal Wire Strings(2006-2009), Bill Taylor's Sources for Fingernail Technique, and articles that appeared on previous websites (clarsach.net and wirestrungclarsach.org) are accessible on the archival branch site https://wirebranch.wordpress.com

New members are always welcome, and you are invited to join the Clarsach Society through its website https://www.clarsachsociety.co.uk/join. Please be sure to specify the Wire Branch as your chosen branch.